One belle was recently assigned “dessert” for a large family dinner. Knowing that several loved-ones had recently celebrated great success with weight-loss and general feelin’ good on the Whole 30 plan, she figured a waistline-friendly dessert would be much appreciated (and better for those who might not have fully embraced the concept)!  But coming up with a dessert sans dairy, sweeteners (not even the chemistry lab ones, aka artificial ones), grains, or alcohol might have stumped a less-determined belle.

Well…pears, ghee, cinnamon, and walnuts to the rescue!!  Yum!! 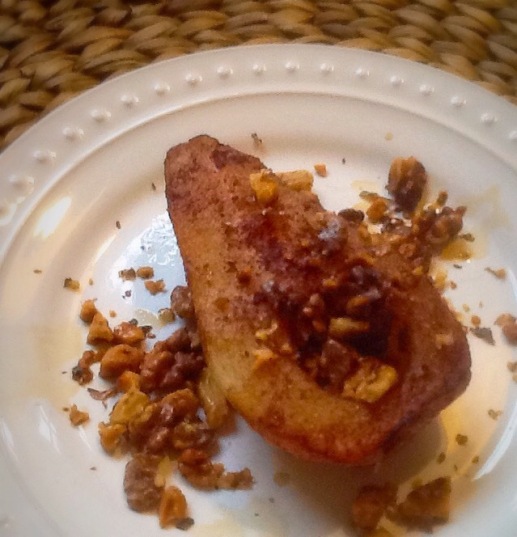 – 4 Pears, plan on one-half per person (we used Bosc) and adjust recipe as needed

– juice of one lemon

– 1 t. Cinnamon (plus more for sprinkling)

– 1 c. Toasted walnuts (we toast with olive oil and salt)

Wash and peel pears, then cut in half. Toss or rub fully with lemon juice to keep them from turning brown before they bake (the lemon also adds another dimension to the flavor).

Place pears in baking dish, cut side down. Combine cinnamon and ghee, then poor over pears, making sure to fully coat. Sprinkle with extra cinnamon

Toast walnuts. At this point, the dish can be stored countertop or in the fridge until dinner begins. About a half-hour before serving, place pears in the oven at 350 degrees. Let the aroma cause great anticipation.

Top each pear with walnuts. Serve…and bask in the accolades. You’ve pulled off a skinny (and incredibly delicious) dessert!

PS…vanilla or cinnamon ice cream would be da bomb with this…for those wishing to throw caution to the wind, of course. Shut the front door!!